Guns of El Chupacabra: The Story of the Production 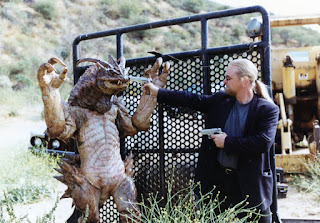 POST SCRIPT:
From the footage we shot during this period of time I was able to construct three individual films making up the Guns of El Chupacabra Trilogy. Though the title figurehead of this film group is the most relevant feature, the other films each offer a unique view into the Zen Filmmaking legacy of El Chupacabra.
A couple of year before he passed away, Don’s father died. With this, Don retuned to his hometown of Adrian, Michigan. While there he fell in with a group of Christian zealots who preached, “A bible in one hand, a gun in the other.”  As he was the hometown boy who had made good in Hollywood they heartily embraced him. They even gave him a radio show on their pirate radio station. …This, until the FCC shut them down and confiscated their equipment. Don was rebaptized and believed he had been cleansed of all his sins. I don’t know about that but while he was there he wanted to show the congregation Guns of El Chupacabra. The only problem was, there was all that nudity in the film and he believed that the nudity would not be acceptable to a Christian audience. As such, he asked me to edit it out. I did so and sent him that version. This is the PG version of the film that was released much later as, Crimes of the Chupacabra. He was very happy with his new group of friends and remained in Adrian for a time until the strain of the relationship with his step mother got too intense and he was forced to leave. I picked him at LAX. This period, and his interactions in Adrian, truly defined the last years of Don’s life.
When Don passed away I knew that he was still in possession of the El Chupacabra creature costume. Though I hoped to get it, have it repaired, and do another film featuring it—resurrecting El Chupacabra, Don’s wife had discarded it before I had the chance to retrieve it. She did this knowing how much Don disliked the executive producer whom had given it to us as she had sued Don shortly before his death due to an unfulfilled movie contract. This, in association with the fact that Don’s wife and his daughter moved out of the house they had lived in for over twenty years in Canoga Park shortly after his passing, left them in the mode of rapidly discarding all nonessential items. Thus, El Chupacabra is lost forever.

You can also find this article on Scott Shaw.com at:
Guns of El Chupacabra: The Story of the Production
- May 16, 2019

Here's a fun/interesting recently rediscovered review of Guns of El Chupacabra By Steve Latshaw The "B" or independen...

Scott Shaw
Hi Everyone, I’m an Author, Filmmaker, Actor, Composer, Photographer, Artist, Blogger, etc... As an author, I've written a bunch of books that are available everywhere. Plus, they have been translated into a lot of different languages. So, you can find them around the world. As a filmmaker, back in 1991, I created a new style of filmmaking that I titled, Zen Filmmaking. In essence, the primary premise behind Zen Filmmaking is that you don't use a screenplay in the creation of a film. Instead, you allow the spontaneous creative energy of the moment to be your only guide in the filmmaking process. I've made a bunch of movies based on this style of filmmaking. In a nutshell that’s me… Hit over to scottshaw.com for the all and the everything Scott Shaw. Be Positive!